The lodge's first meeting took place on the 1st October 2019 when W Bro Alan Everard was proclaimed Master for the ensuing year.

Once the lodge was opened there was a report and W Bro Neil March, Provincial Deputy Grand Director of Ceremonies, entered and announced that W Bro Charles Elliott, our APGM, was outside the door of the lodge and requested admission. A procession of Grand and Provincial Grand Officers was formed to escort him into the lodge where he was greeted by the Worshipful Master.

Following a ballot, W Bro Lee Taylor was made an honorary member and thanked the members for accepting him into the lodge.

The Worshipful Master thanked those officers who were to continue in office for the ensuing year and also appointed and invested W Bros David West and Martin Cook as Charity Steward and Organist respectively.

The lodge was then treated to an oration entitled "The Royal Arch and the Third Degree" from the Worshipful Master, which was very well received.

The remaining lodge business was completed and the brethren retired to the bar for a drink before dinner. The festive board was a very pleasant occasion and the Master's Song was delivered by our Chaplain, the Rev Martin Howse, in a very competent manner indeed.

A few photos taken at the festive board during the singing of the Master's Song. 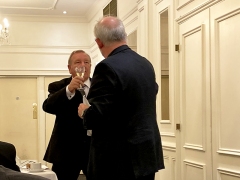 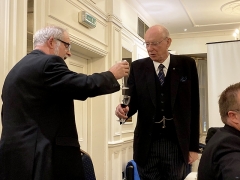 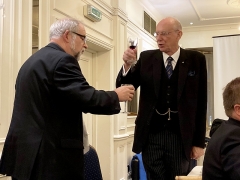 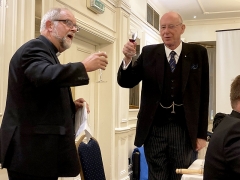 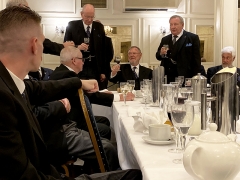 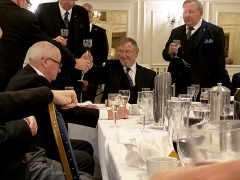 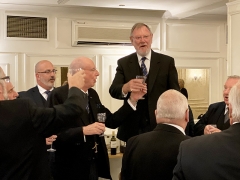 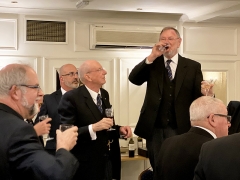 This website uses cookies to improve your experience while you navigate the website. The cookie categories are explained below. Necessary cookies are automatically stored in your browser unless you have used the browser settings to block them.  Any third-party cookies we use will only be stored in your browser with your consent.

Necessary Always Enabled
Necessary cookies are essential for the website to function properly. This category only includes cookies that ensure basic functionality and security. These cookies do not store any personal information.
Non-necessary
Cookies that may not be necessary for the website to function properly and are used specifically to collect user personal data via analytics, ads or other embedded content are termed as non-necessary cookies.
Functional
Functional cookies help to perform certain functionalities like sharing the content of the website on social media platforms, collect feedbacks, and other third-party features.
Performance
Performance cookies are used to understand and analyze the key performance indexes of the website which helps in delivering a better user experience for the visitors.
Analytics
Analytical cookies are used to understand how visitors interact with the website. These cookies help provide information on metrics the number of visitors, bounce rate, traffic source, etc.
Advertisement
Advertisement cookies are used to provide visitors with relevant ads and marketing campaigns. These cookies track visitors across websites and collect information to provide customized ads.
Others
Other uncategorized cookies are those that are being analyzed and have not been classified into a category as yet.
SAVE & ACCEPT
Powered by